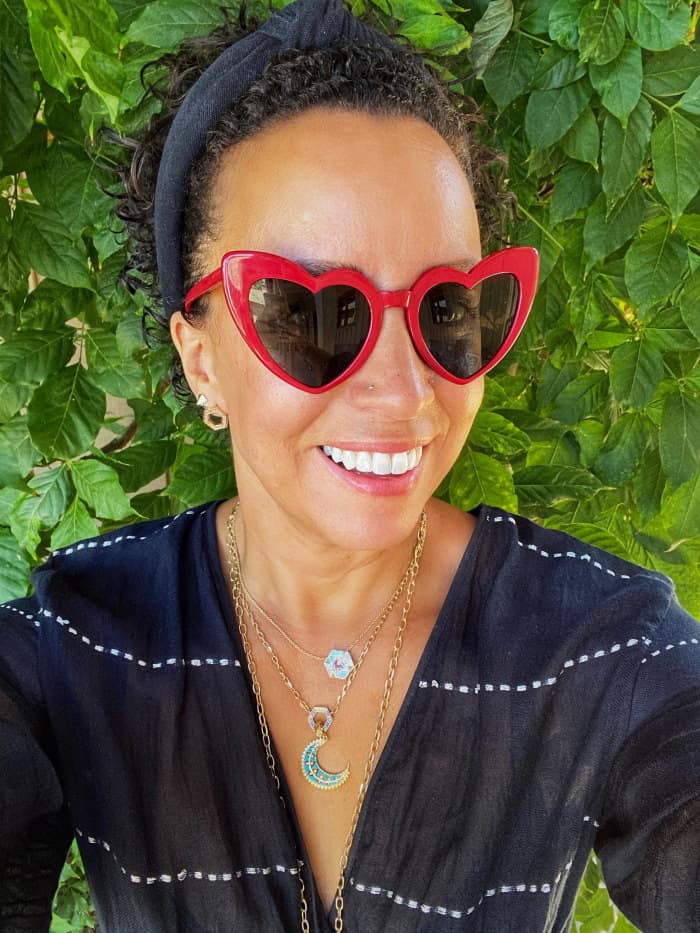 By the time Lauren Harwell Godfrey entered her third career about three years ago, she had already had a series of what most people would consider dream jobs. She spent over 15 years as a creative director and art director for mega brands such as Nike, Levi’s and Absolut Vodka. And she then went to culinary school and landed uber-covetable stages (the cooking world’s word for its hard-to-come-by internship positions) at Chez Panisse and Bar Tartine, two of the Bay Area’s most notable restaurants. But Harwell Godfrey is not the kind of woman satisfied with things that simply look good on paper. Rather, she’s someone motivated by a guiding principle to add value wherever she is and to contribute to the world in a way that’s special and unique. When she launched her fine jewelry line in 2017, she began charting a new course doing exactly that.

Harwell Godfrey, her namesake label, is recognizable for its bold, colorful aesthetic, exquisite pattern play and its distinctive use of inlay and enamel. (Lately, she’s been inspired by the vintage African textiles she’s been collecting.) It’s the kind of happy, upbeat, hippie-chic jewelry that seems to give you a boost the minute you put it on. And, in fact, the good vibes aren’t just in your head: They are actually a conscious part of Harwell Godfrey’s design process. Each piece is rooted in some aspect of sacred geometry, the healing power of stones or astrology (she’s an Aquarius)—and many feature engravings about good energy.

Her jewelry is gorgeous all on its own but it’s those good vibes that have made it especially relevant lately. Over the past several months, she’s created heart talismans with different stones dedicated to supporting different causes: 30% of proceeds from sales of her malachite heart benefitted World Central Kitchen while she created an onyx version in the wake of George Floyd’s murder and pledged 100% of its proceeds to the NAACP. To date, she’s raised over $100,000.

You’re had quite the career the shifts!  Any tips for budding entrepreneurs looking to change careers and start something new?

I’ve learned so much from these career pivots and it’s ultimately been very rewarding but there have also been real challenges. If you’re looking to change careers, be make sure you are prepared to take a financial hit. Especially if you are starting a business — it really takes time and capital to build and every step of the process needs to be nurtured. Also be prepared to give a lot of time to your new endeavor as you are getting established.

Running your own business, as you are doing now, can be a rollercoaster of highs and lows.  We all love the highs, but do you have a life practice, mindset or motto that helps propel you to keep moving forward during the lows?

The lows are important because they usually happen for a reason. Rather than being afraid, I try to use them as a learning opportunity and make changes as needed. I have found that “No risk, no reward” has served me well as an entrepreneur — I tend to be a ‘yes’ person and figure out a way to make it all work to continue growth.

As a mother and entrepreneur, I know you are always juggling a million things. How do you try to maintain the balance?

To be honest, I’m not doing a great job of maintaining balance right now! If I listened to my own advice I would be exercising more to clear my mind and sleep better, both of which naturally create a better mental space for balance.

What is your favorite wellness or beauty tip to share?

I think baths are wonderful for wellness, especially when infused with healing minerals. I’ve always been a big fan of Epsom salts, but Vertly’s Infused Bath Salts take it to the next level. The tension release has become addictive!