The Path to Self Discovery with Anoushka Mirchandani 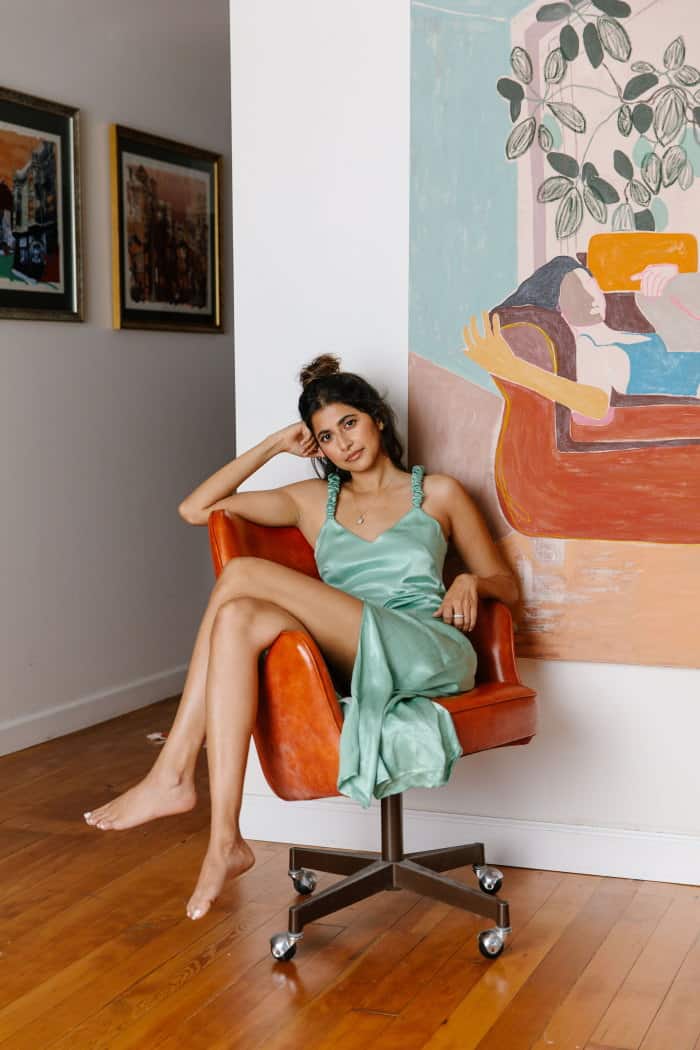 For many of us, losing a great job is one of the worst things that could possibly happen. For Anoushka Mirchandani, however, it was the defining moment two years ago when her life changed for the better.

From the time she was little, Anoushka was always the creative friend in the group, the student doodling in class, the one with a natural proclivity for art. But the message she received as a young girl in India was that being an artist wasn’t a viable career option. So, she dutifully followed the path she was supposed to: Get a degree and then get a job in a financially secure industry. Eight years in, she was completely unhappy. Then, serendipitously, she was fired, and her life opened up to invite art back in.

What started out as her “Eat, Pray, Love moment”—traveling to Greece for a 3-month art program and embracing the creative release that came with it—has in the last two years blossomed into a wildly successful second career.  (Her first solo show sold out completely.)  But success doesn’t even begin to measure the value of what Anoushka has achieved.

Taught as a young girl to be conscious of not showing too much skin or inviting unwanted attention, she grew up with a lot of fear and shame around her body. Drawn immediately to painting female nudes, her work has thus become a visual diary of her own personal journey of healing that relationship, a journey that has resonated with countless women regardless of age, cultural upbringing, skin color and so on. As someone who had spent so much time trying to fit into society’s idea of what she should be doing as an Indian woman that she’d lost herself along the way, there is no greater victory than starting down a path toward your true self. And, even more beautifully, it’s a path to self-discovery on which she’s invited other women to join her.

And so, if you’ve ever felt like you’ve gone too far down one road to start down another, let this story inspire you.

What was your career trajectory prior to becoming an artist?

I moved to the United States from India when I was 18 for my undergraduate degree. I graduated from Denison University in Ohio, after which I completed a summer business program at Stanford University which brought me out to the West Coast. Shortly afterwards, I was offered a job at a tech-start up in Silicon Valley. Of course, this was the ideal outcome for a young, Indian immigrant student at the time — a respectable career in tech, a job that allowed me to have a visa to work in the United States, and a fairly stable and secure path ahead. I proceeded to spend 7 years in the tech industry at various different start-ups in San Francisco, till I finally transitioned to focusing on my passion – art.

At what point did you decide that being an artist would be your official career?

Although I was always fascinated by art, and constantly being creative, I never truly believed that being an artist was a viable career choice for me due a number of different factors — my cultural upbringing in India, my immigration status and immigrant scarcity mindset, the preconceived notions that were ingrained in me about what a successful career looks like, etc. I took the plunge in 2017, and transitioned to officially being an artist, and dismantling the self-imposed cultural limitations and the imposter syndrome I experienced to start showing my artwork. Owning my truth, that I am an artist was essentially a journey in finding my way back to myself.

Can you tell us a little bit about your artistic style as an artist? What inspires you?

I’m consumed by, and constantly reflecting on the woman’s experience, and her path of self-discovery, including the obstacles and challenges she encounters, and the thoughts and emotions that arise as a result. I seek to capture this intimate world of women, using my own experiences and observations as a vehicle, and expressing my revelations through my artistic practice. Stylistically, I create figurative oil paintings to capture the gestures, and nuances of the woman’s experience (drawing heavily on my own narratives) and then I let the physicality of the human form drop away to capture the essence of emotionality in my abstract artwork.

Any advice for budding entrepreneurs looking to make a career change and start something new?

I would tell anyone looking to make a change that it is never too late to reinvent yourself. However, be prepared to fail, multiple times, and be prepared to get up and dust yourself off, and do it again. It’s not an easy path, and there will be prolonged moments of fear, failure and rejection but it’s important to stay resilient, take calculated risks, and persevere. I also think diving deep into your values, and changing your definition of what success looks like to you personally, is a critical step of the process! For me, when my income dropped to a fraction of my tech salary, I felt unsuccessful, until I shifted my understanding of what being successful is — Of course, part of feeling successful is having a certain amount of income, but more significantly, it’s also about being fulfilled, having meaning and purpose, flexibility and freedom and enjoying the actual work.

Being an artist can sometimes keep you in your own head space.  How do you maintain balance with work and life?

Honestly, balance has been eluding me these days! I just wrapped up my debut solo show in San Francisco in September, which I spent 6+ months working in a manic spurt of energy, 10-15hour days — all during COVID quarantine. Being an artist can be very isolating, so I’m grateful for my family, and friends that checked in on me, and brought me out of my cocoon to spend some time in the outside world! To stay grounded during hectic times like this, I do try to keep up with a morning ritual. Slow mornings in my garden in San Francisco, with tea and time spent journaling allow me to clear my head, and create space for the rest of my day.

What is your favorite wellness or beauty tip to share?

I’m a huge fan of natural products, and pretty much obsessed with Vertly lip butters. They keep my lips so hydrated and soft. Also, my secret pleasure after a long day on my feet in the studio, is a longggg soak, preferably with Vertly bath salts!